>
5 Common Coffee Myths Debunked
Recipe: Espresso Martini
5 Reasons Why Costa Rica Makes Great Coffee
Recipe: Peppermint Mocha Latte
The Question of Bean Roast and Coffee Grinding
How Coffee Is Harvested & Processed
Milk Or No Milk? Hot Coffee Drinks Explained
Coffee Recipes From Around The World
What Are Single Origins and Blends?
Coffee Roasting Explained
How To Use Coffee In Your Kitchen, Besides Just Drinking
Coffee Is Seasonal Too
July 20, 2022 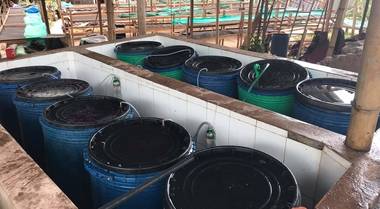 Coffee processes can be so in-depth and alter the flavor of our treasured bean so much. Do we want something clean and tart or smooth and chocolaty? Different processes affect different flavor profiles. What in these processes alter the nuances in the final cup? The answer to the anaerobic coffee process is simply fermentation.

The word anaerobic means that the system lacks oxygen, coming from the original Greek, meaning ‘without air.’ It stems from a French winemaking method of the same name. In the other methods, oxygen is present. Here, though, it is a painstaking and arduous task to make sure that the environment that which fermentation is taking place is a fully oxygen-deprived space.

The anaerobic process can be used in conjunction with the other methods. Depending on how the cherries are dried, you can have anaerobics that are washed, natural, and honey.
It may be important to understand the structure of a coffee cherry first, so it may be a good idea to check our other article on the washed method. We go in-depth on the different layers of the coffee cherry. 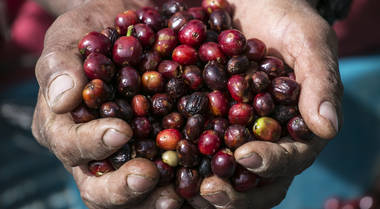 To fully understand how the anaerobic process affects coffee, it is important to know what fermentation is. This is not an exhaustive explanation of the nuanced and complex fermentation reaction but is significantly simplified to suit our needs.

Fermentation is incredibly fascinating and expansive; it exists in so many vital areas of our world from food and drink to our gastrointestinal tract and cells. A small, yet important, distinction to understand is that yeasts are a fungus and are different from bacteria, which may also undergo fermentation. This will become important when we talk about the different kinds of fermentation processes that exist.

In coffee, much like wine, it is when yeast or bacteria that are either already present in the skin layer of our fruit or added, later on, consumes organic compounds. These organic compounds are the sugars present in the mucilage. The yeast or bacteria then produces a litany of acids, alcohol, and carbon dioxide. This reaction continues until that sugary sweet environment runs out of fuel, the moisture content drops too low, or the alcohol content raises too high that they die off. 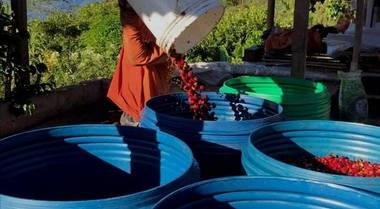 What Sets the Anaerobic Process Apart?

Our coffee goes into air-tight tanks, also known as vats, with a one-way valve. Into the vats go our cherries, which are de-pulped, exposing the mucilage. (Carbonic maceration is the process in which whole cherries are put into the vats.) There are two different ways that the expulsion of oxygen may be done. The first is through carbon dioxide being injected into the entire system so that there is never oxygen present in the fermentation process. Carbon dioxide is heavier than oxygen, so the carbon dioxide sinks to the bottom. The system becomes pressurized and the top layer of oxygen is released. The second is done by letting the tank build up pressure naturally by yeast producing carbon dioxide. The one-way valve is then opened, allowing just the oxygen to escape, which changes the method name to semi-carbonic.
There is much more control over the fermentation times, temperature, and pH levels. The lactic acid lengthens the fermentation times, which can bring out some extraordinarily complex flavors. 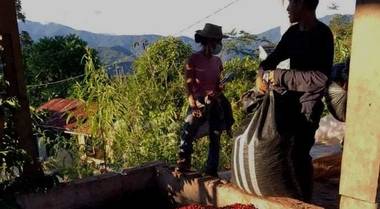 How Does this Process Affect the End Product?

The best way to take anaerobic coffee is as a pour-over! They are roasted lighter, often possessing a fruity and tart flavor profile. This coffee is generally sourer, so the milk does not mix well with it. If something is needed, adding some sugar can help make the flavors pop. You also are not going to get the same results from a commercial coffee maker. Break out your French press or V60 and get some blooms going. As always, good water chemistry is also important in yielding good coffee, so be sure that you are using the best water possible.

@Lardera | by adagioteas - copyright 2023
Privacy Policy   |   Cookie Policy
Ask us a question.
Anytime!
Questions?
Lardera Chatbot
You may ask me "Where is my order?" or "How much is shipping?" and I will gladly answer your question.
If you don't like my answer, our customer support team will email you a reply shortly. Ask me!
>